‘The Gardener’s Apprentice,’ a Numenera RPG adventure, is now available on DriveThruRPG

“The Gardener’s Apprentice,” a licensed Numenera RPG adventure, is now available on DriveThruRPG.

The adventure is a 162-page adventure campaign with full colored art. It’s suitable for four, first tier players and mixes scenes of investigation, combat and discovery.

The Numenera Corebook from Monte Cook Games is needed to play the adventure, with Numenera: In Strange Eons recommended since there’s some elements that may take a toll on the Player Characters’ sanity.

The adventure is published by Metal Weave Games.

The players are tasked with reviving an automaton who is venerated by a city as a god, but they face numerous obstacles such as rival religions and sanity-destructive tools and knowledge.

The adventure also includes a gazetteer featuring the land of Xenthropa where the game begins.

There are also sections detailing the capital City of Quendazaem and a short section focusing on Uncanny Relics, a form of cyphers that utilizes GM Intrusions. 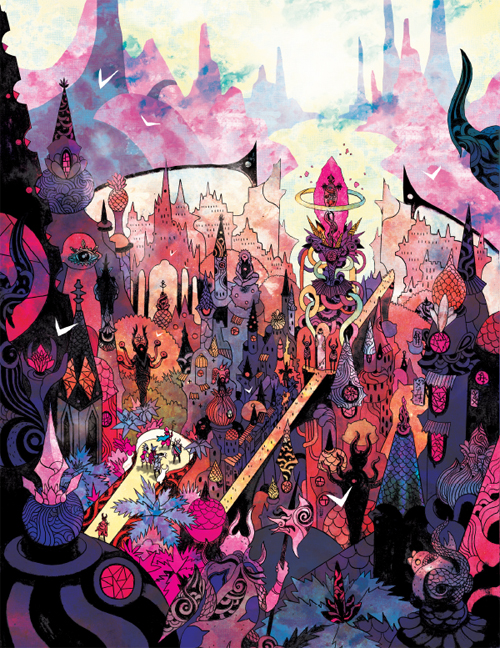 I’m pretty happy and excited to have the adventure released since it’s been a pretty long journey from conception, realization and publication, and it all started in 2015.

The idea of ‘The Gardener’s Apprentice’ started out as a simple encounter in another adventure involving a wooden automaton who was powered by water.

It then blossomed (and grew exponentially) into a full adventure module that not only touched upon the bizarre nature of automatons in the Ninth World but how others perceived and used them. One of the ideas that struck a chord with me about Numenera is how the denizens of the Ninth World use knowledge and technology of the past in ways that they were never meant to be used.

In ‘The Gardener’s Apprentice,’ a city has used an automaton as their god and ruler for hundreds of years creating a society that’s slowly been dividing from one filled with utter devotion to one that’s right on the edge of ambivalence and skepticism.

The adventure entails what happens when the god breaks down and the player characters’ efforts to track down ways to resurrect the machine.