Numenera adventure ‘The Gardener’s Apprentice’ to be released on Monday 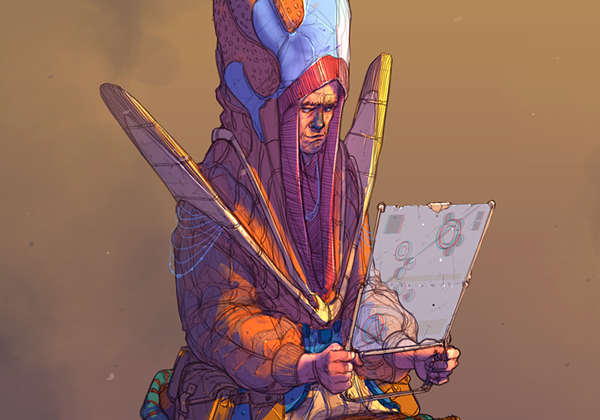 Interior art from ‘The Gardener’s Apprentice’ by Tano Bonfanti.

My Numenera adventure “The Gardener’s Apprentice” is set to be released this Monday. (Update – It’s out now on DriveThruRPG)

It’s been a long and hard-working journey to finally bring this adventure to publication.

Speaking of which, the adventure, which is about 160 pages long with full colored art, will initially be released in PDF format on DriveThruRPG.

Then at a later point, the adventure will be made available as a softcover and a hardcover with those who purchased the PDF getting a discount on those formats.

Andreas Walters with Metal Weave Games has done a great job putting everything together and making sure it looks spectacular.

The adventure is suitable for first tier players.

Below is the introductory text of the “The Gardener’s Apprentice.”

A religious crisis in the capital city of Quendazaem threatens to end the ruling order founded upon the veneration of an automaton god.

Rumors have circulated that the metal deity has been mysteriously deactivated which in turn has led to many seeing an opportunity to unseat the Church of Noromethreon as the dominant religion and ruling power of the city.

While the church and the dwindling faithful continue to wait for their god to reawaken, two desperate priests can wait no longer and secretly devise a blasphemous plan to force the resurrection of their god.

Working outside the tenets of their religion, the priests have set into motion events which will either provide the church’s salvation or its damnation.

The Gardener’s Apprentice is an adventure set in the tabletop roleplaying game of Numenera.

The adventure is made up of scenes involving a mix of investigation, discovery and combat.

The Numenera Core Rulebook is needed to play the adventure. Numenera: In Strange Eons is recommended since a good portion of the creatures, discoveries and ideas presented in the adventure can cause Player Characters to suffer Intellect damage, descending them into madness.

The Gardener’s Apprentice is divided into three sections with the first detailing the land of Xenthropa and the capital city of Quendazaem where the adventure begins. It’s then followed by the adventure itself which is suitable for four players using first-tier characters.