Testing a 50mm lens on some candlelit photography with a very deadly subject.

Dark, gothic fantasy is back in the Dungeons and Dragons world with the release of Curse of Strahd.

My first exposure to D&D was back in 3rd edition, and although I was aware of Ravenloft, I wasn’t really looking at the time to get into the horror and macabre aspects of roleplaying games.

I was just content at playing straight up fantasy games.

Now that my tastes in RPGs are evolving to new directions, I thought I would take a quick look at what I’ve read so far from Curse of Strahd and take advantage of using the book to test out a camera lens on some candlelit photography. 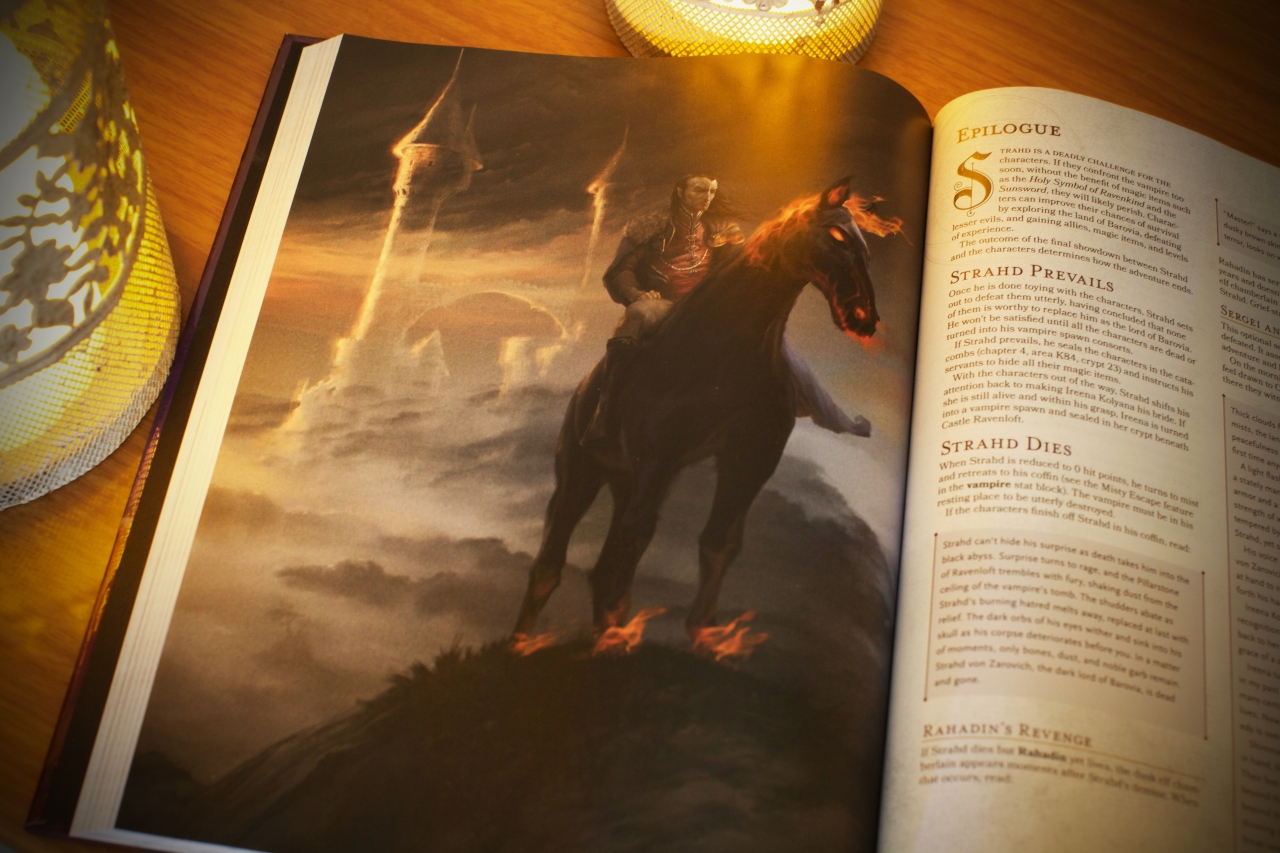 The count himself in Curse of Strahd.

Curse of Strahd is a 256-page hardcover book, with a front and back map, that provides everything you need to run a campaign in a land cursed by the powerful vampire, Count Strahd von Zarovich.

Although the campaign is centered on the original Ravenloft adventure (which is included), the designers have extended the adventure to not only include the count’s castle, but various areas including towns, villages, and temples where encounters with deliciously strange NPCs and grotesque monsters are at every corner.

The encounters are well written and do a good job of immersing the players in this gothic and very deadly world, the latter is especially true if you’re overconfident and not prepared.

But don’t worry since there’s a bunch of maps, helpful items and people to seek out included to make sure that you don’t leave the land of the living (well…for the most part) too soon.

Lost in the dark? Don’t worry there’s a bunch of detailed maps and helpful people to guide you in the Curse of Strahd.

Dark and gothic anyone? Really love the art in Curse of Strahd.

The tarokka deck laid out in the back of the Curse of Strahd book. Unless you want to cut the book to pieces, you’re going to have wait until April to get these in proper card form. You can also use a regular card playing deck.

The moody art, from the highly detailed maps and character/monster profiles, really amps the creepy and horrific tone of the setting.

One of the most interesting aspects of the campaign is that it’s designed to be an open ended experience where replaying the adventure is guaranteed to be an altogether different experience. This is achieved through a tarroka card deck which randomizes locations where players find integral elements of the campaign.

In lieu of a tarokka deck, you can also use a regular card deck.

Overall, I’m really pleased how the adventure is laid out with varied encounters and locales to keep your players entertained through the mysterious and eerie land where a night with the count is all but guaranteed, although you might not be in one piece when you get there.

Curse of Strahd campaign book for Dungeons and Dragons.